This client came in to her regular session with physical complaints – both shoulders debilitated in two ways. Both ached enough to interfere with work, chores and even sleep. She is under the care of a medical doctor for the underlying torn rotator cuff and the old, knotted muscle and is making plans for surgery. This is art therapy AND the medical model in collaboration.

It is important to address “disease” on all levels. We thought it a good idea to take a look at the metaphysical causes of her shoulder problems too. Guided inward through a short meditation, she connected to the pain in her shoulders and back and drew the following. The imagery she uses depicts her as the family garbage dump – and she identifies the cost of carrying all the shame, secrets, poverty, divorce, single mom. It is easy to see the shoulder pain as the result of the (emotional/psychic) weight she bears from carrying this huge bag of family crap around.

The client then participated in another guided meditation releasing the burden and quitting her “job” as family garbage carrier.

The following week in preparation for her upcoming surgery, the client drew the right shoulder close up…a stabbing, burning, sharp and invasive pain. A knot she dates back to her 17th year; a specific memory. She described it as never healing since another arrow came along just about the time it started to scab over. It looks really painful. A constantly inflamed wound. 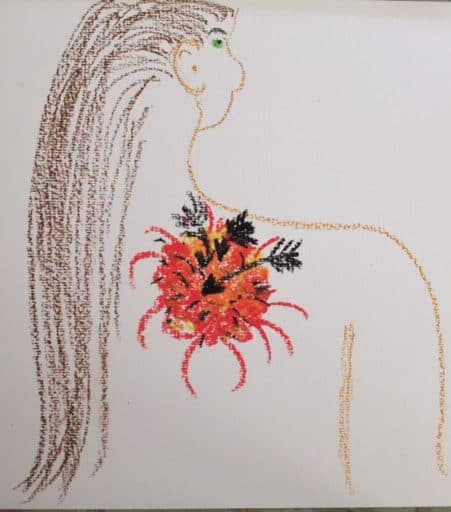 We had a short conversation about wound care and how she wanted to treat the unhealed place in her back. She arrived at 1)protect it! so it doesn’t continue being hurt and 2)air it out. We did another guided meditation as the two-part “solution” presented itself in the form of a familiar – a Totem Animal, the Red Tailed hawk. Perched on her shoulder it both guarded/protected her and allowed for the airing out and healing of the wound.

When she drew the hawk on a tissue paper overlay it was a natural and easy fit to her shoulder. In the metaphysical realm, inviting Hawk medicine in is very powerful as Hawk is both Protector and Messenger. Not only is it comforting to know that Hawk’s got your back, it is also important to listen for the message the pain is bringing. Perhaps releasing an old belief, or grudge is in order. Perhaps gratitude is called for; perhaps self care. Perhaps the message is in the process itself. Either way this application of art therapy can support the healing she does with other professionals and even add depth to her relationship with her inner healer